Gloucestershire’s Lord-Lieutenant has presented Flexmort with Britain’s most coveted commercial prize, a Queen’s Award for Enterprise in Innovation.

Dame Janet Trotter visited the headquarters of Roftek Limited, trading as Flexmort, to formally hand over the award which the company will hold for the next five years.

The business, based in Waterwells Business Park, Quedgeley, designs and manufactures flexible mortuary storage and cooling solutions used by both the NHS and the funeral industry.

Managing director Simon Rothwell launched the enterprise in 2010 after a chance remark by his brother-in-law that UK hospitals were struggling to cope with a rise in obesity. This meant many bodies were too large for traditional mortuary refrigerators. It led him to develop a range of cooling units which would allow a body to be stored anywhere, including a bed, trolley or coffin, without the need for a cold room.

As a former policeman, he had also witnessed the trauma suffered by bereaved parents having to see their child in a mortuary. The entrepreneur came up with a solution now widely used on maternity wards – the CuddleCot which has been featured in national newspapers, on radio, and even on EastEnders during a storyline about a stillbirth.

A cooling pad inside the crib allows the baby to be kept in a room with the parents for longer, instead of having to be moved to a mortuary. Midwives and other experts say giving a family this time is crucial because it enables them to form a bond. This helps them come to terms with the death of their baby, for example by taking photographs, dressing the infant, or simply staying close.

The company also provides mobile mortuary domes, which can be put up quickly in the event of a disaster, and other temporary storage facilities providing extra capacity. These include the AirCool12 system, a mobile mortuary that can be set up in 20 minutes to handle multiple casualties.

Presenting Mr Rothwell with a cut glass bowl, Dame Trotter said: “I’m amazed by everything you have achieved. You clearly have huge potential. There is vision, hard work, innovation, excellence and there is team work. We are proud you are here in Gloucestershire and thinking of expanding.”

Mr Bungard also read a proclamation from a scroll signed by the Queen.

Mr Graham said: “Flexmort is a great example of a company that sprang up almost by accident through some innovative thinking by an individual, Simon Rothwell, backed by the experience of Warwick University’s incubator approach to business ideas. It’s great to have Flexmort here in Gloucester and committed to providing apprenticeships, and to grow locally with exciting expansion plans. Whether it’s cooling systems for bodies, or enabling families to preserve their DNA, Flexmort is continuing to innovate in a way that will impact us all.”

Mr Rothwell will also attend a reception hosted by the Queen at Buckingham Palace for winners of the Queen’s Award.

He said: “This award has come as a huge boost to me and all the staff who have worked tremendously hard to ensure our ground-breaking products are in demand around the world. I couldn’t have wished for more, given that the company has only been going for a few years.”

Find out more about Flexmort 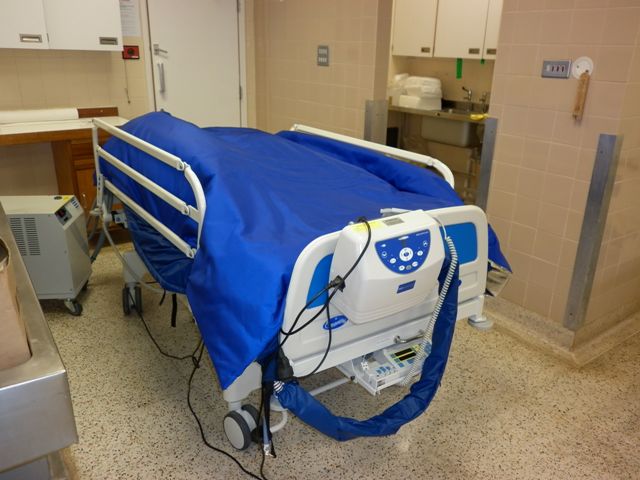 Lyn Anderson, Mortuary Manager at the Watford General Hospital, tells of her experiences with the CuddleBlanket cooling system. 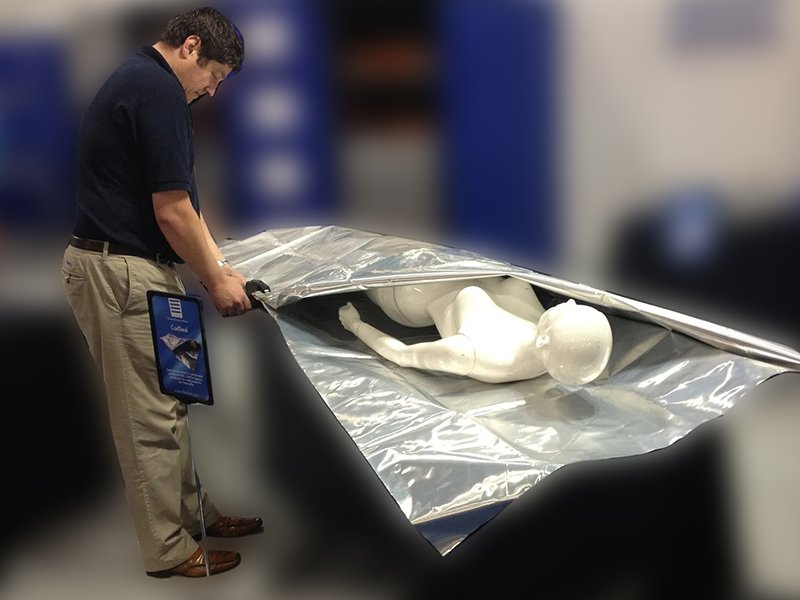 We were approached by a funeral director asking for a means to safely recover and transport a body that had been deceased for some time. 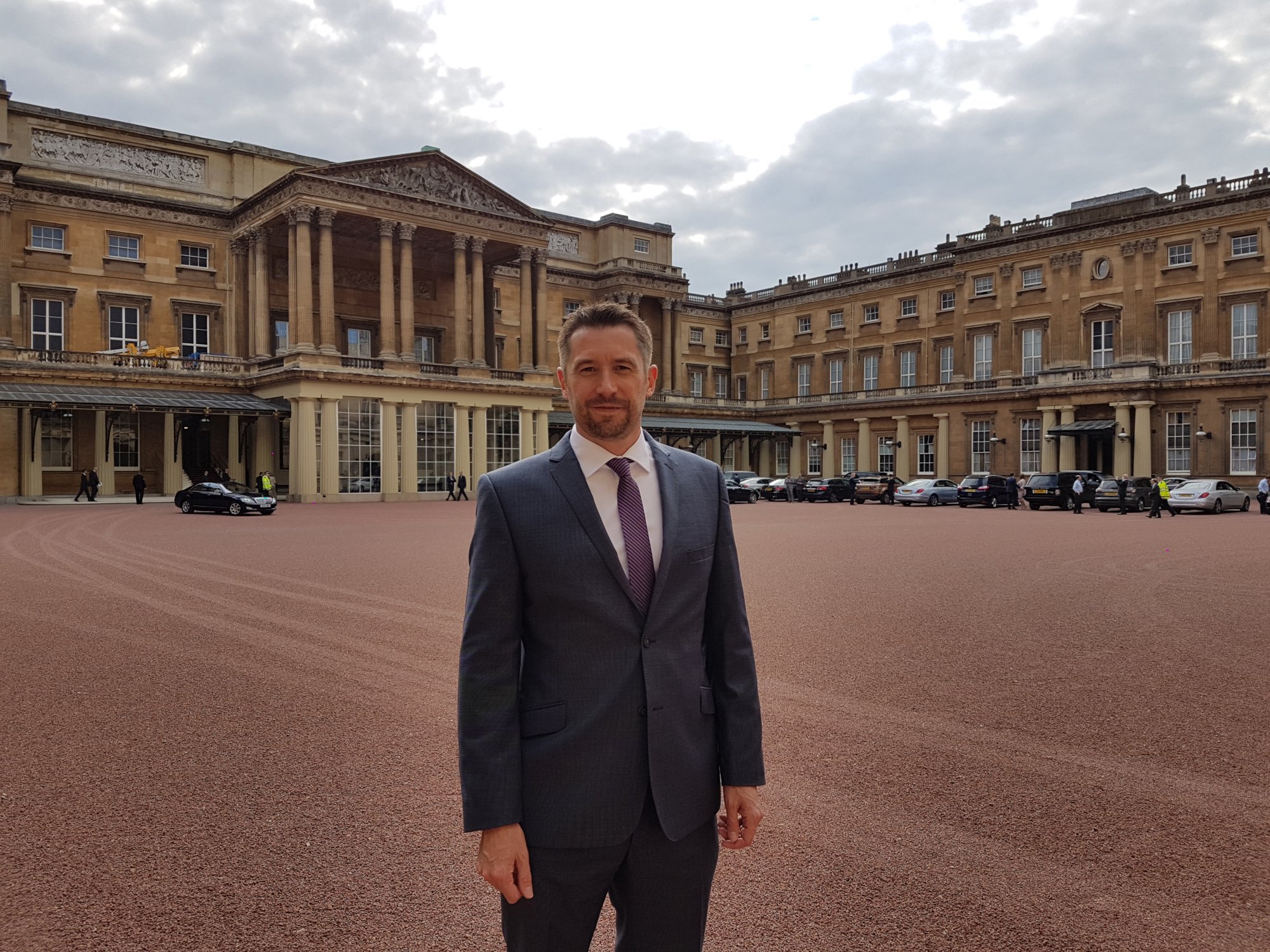 Simon Rothwell was invited to the palace to celebrate Flexmort winning a Queen’s Award for Enterprise in Innovation. 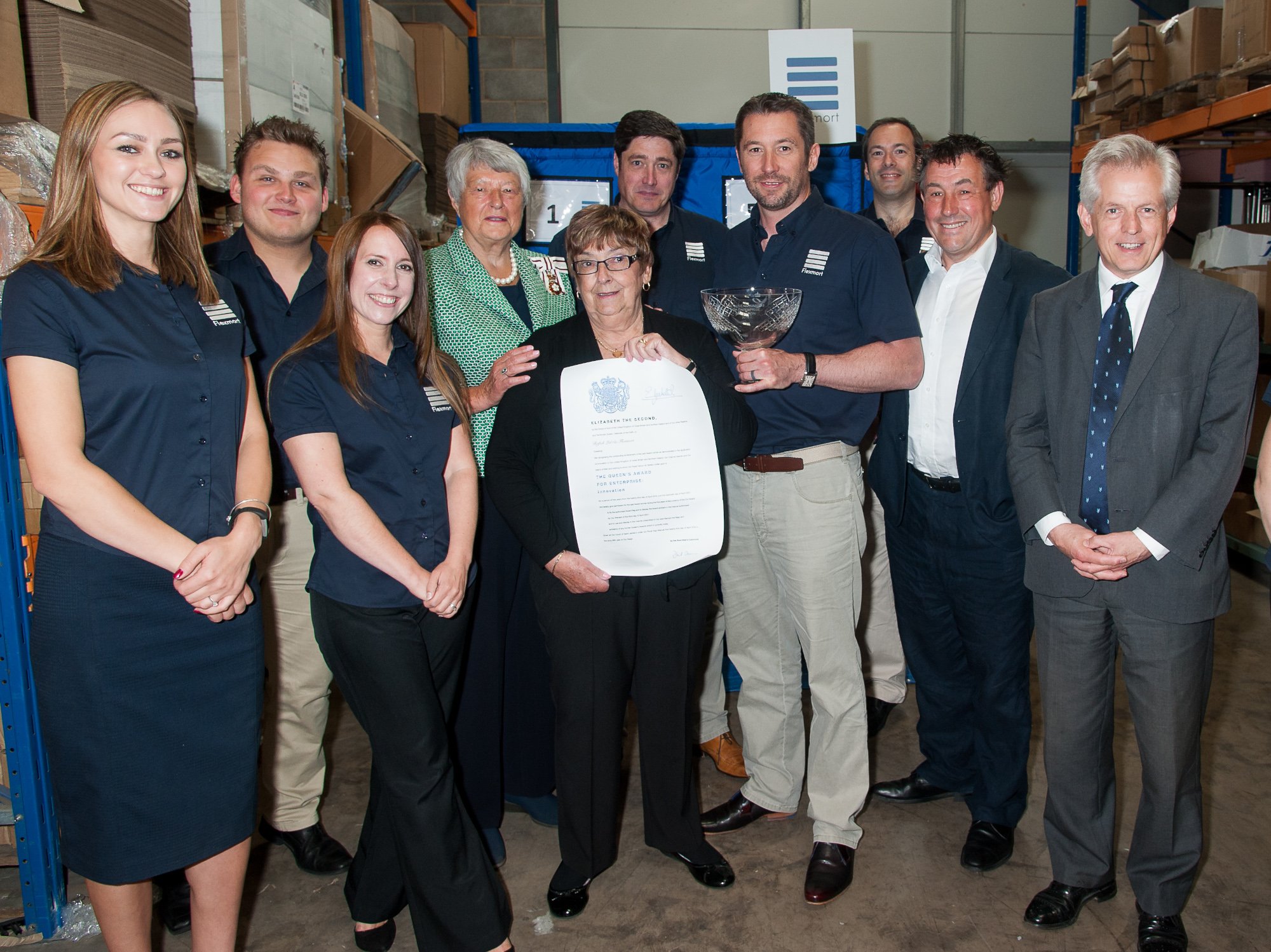 Gloucestershire’s Lord-Lieutenant has presented the Flexmort team with a Queen’s Award for Enterprise in Innovation. 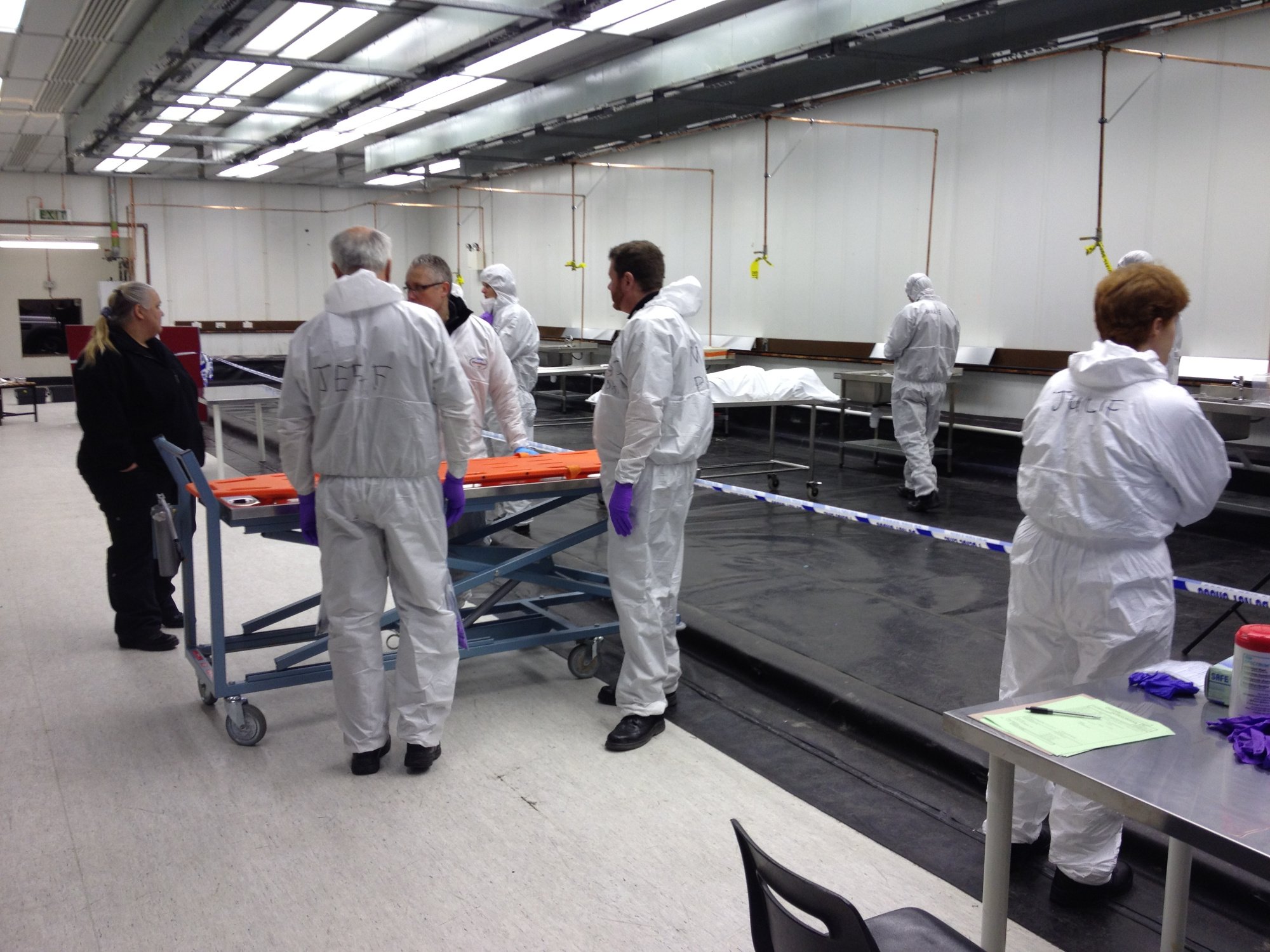 Dealing with the deceased who are contaminated with Ebola presents a range of challenges. Find how Flexmort products can help. 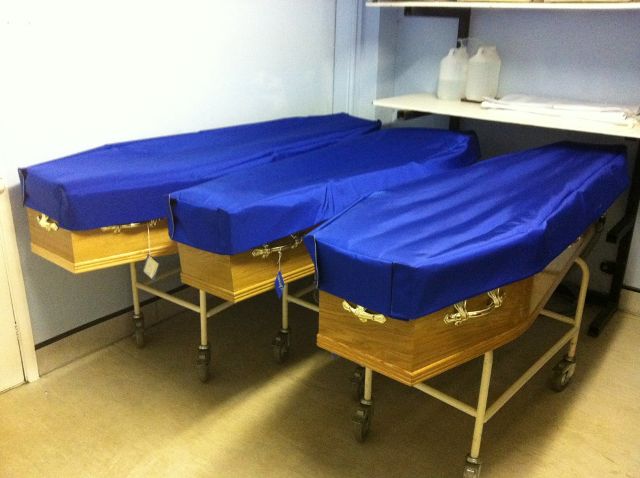 Factors to Consider when Selecting a Body Storage Facility

Consider the following factors in the selection of a facility for body storage so that you can get quality services and value for money. 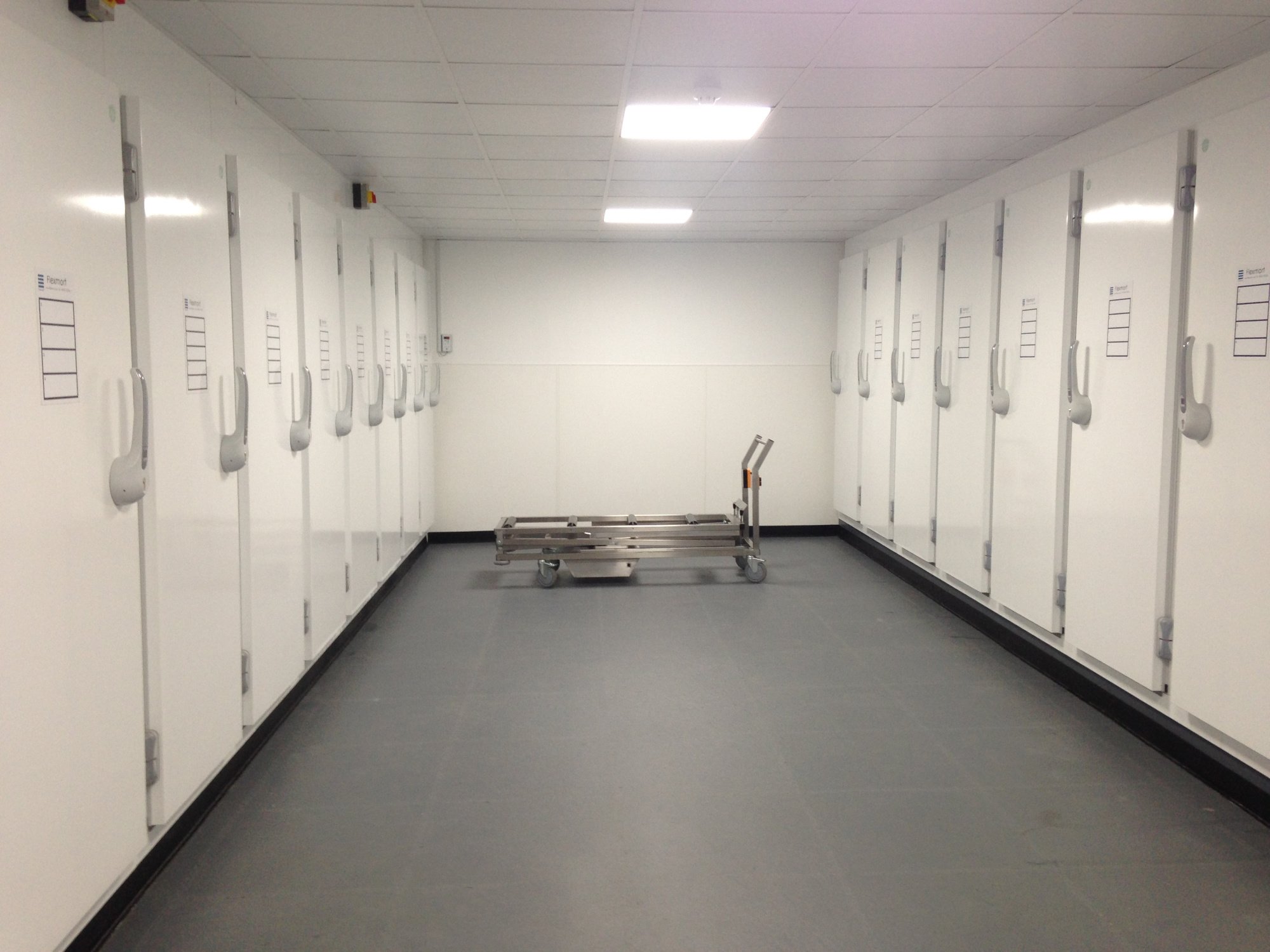 A mortuary is used for storing the deceased in a constant refrigerated environment. Discover the advantages of mortuary fridges.

NHS Guidance for Staff Responsible for Care after Death

The Guidance for Staff Responsible for Care after Death is intended as a guide for all those dealing with deceased including hospices.

We use cookies on our website to give you the most relevant experience by remembering your preferences and repeat visits.

This website uses cookies to improve your experience while you navigate through the website. Out of these, the cookies that are categorized as necessary are stored on your browser as they are essential for the working of basic functionalities of the website. We also use third-party cookies that help us analyze and understand how you use this website. These cookies will be stored in your browser only with your consent. You also have the option to opt-out of these cookies. But opting out of some of these cookies may affect your browsing experience.
Necessary Always Enabled
Necessary cookies are absolutely essential for the website to function properly. These cookies ensure basic functionalities and security features of the website, anonymously.
Functional
Functional cookies help to perform certain functionalities like sharing the content of the website on social media platforms, collect feedbacks, and other third-party features.
Performance
Performance cookies are used to understand and analyze the key performance indexes of the website which helps in delivering a better user experience for the visitors.
Analytics
Analytical cookies are used to understand how visitors interact with the website. These cookies help provide information on metrics the number of visitors, bounce rate, traffic source, etc.
Advertisement
Advertisement cookies are used to provide visitors with relevant ads and marketing campaigns. These cookies track visitors across websites and collect information to provide customized ads.
Others
Other uncategorized cookies are those that are being analyzed and have not been classified into a category as yet.
Save & Accept
Powered by